A case of dilated cardiomyopathy in a venezuelan patient with polymyositis

Polymyositis is an autoimmune disease, characterized by the inflammation of muscular tissues. It belongs to the family of inflammatory myopathies, along with dermatomyositis, inclusion-bodies myositis and necrotizing autoimmune myositis. In this case report we present a 39 year old male patient admitted to the Bejuma District Hospital in October of 1991, where the patient is evaluated for 21 days. Electromyography, skeletal muscle biopsies, and further lab tests were performed; posing a diagnostic impression of Polymyositis. After the analysis of these results, the patient is discharged with pharmacological treatment; however, he denies taking the medications. In March of 2007 patient is seen at the Bejuma District Hospital after complaining of respiratory distress during mild efforts, concomitantly non-productive cough and palpitations. It is concluded that the rate of cardiovascular deterioration without constant medical treatment is secondary to untreated Polymyositis.

Polymyositis is an autoimmune disease which belongs to the family of inflammatory myopathies, along with dermatomyositis, inclusion-bodies myositis and necrotizing autoimmune myositis (1,2). It affects the muscle tissue through an inflammatory and necrotizing process that results in progressive weakness. It may also affect the cardiac muscle. The average age of presentation ranges between 45 and 60 years, and it seldom occurs during childhood (3).

Due to its uncommon nature; we present the study of a clinical case in which a patient with a diagnosis of Polymyositis attends to the Bejuma District Hospital, State of Carabobo, Venezuela, with manifestations of dilated cardiomyopathy class III.

Case of a 39-year-old patient from Carabobo, Venezuela, that started exhibiting symptoms of the disease in August of 1991. The patient begins to exhibit proximal muscle weakness in the lower extremities in a progressive and symmetric manner. This progressive muscle weakness limits the patient’s

ability to perform daily activities like walking and stair climbing. Concomitantly, the patient presents with moderate myalgia that was unresponsive to NSAIDS. Due to persistent symptomatology, the patient is admitted to the Bejuma District Hospital in October of 1991, where the patient is evaluated for 21 days. Electromyography, skeletal muscle biopsies, and further lab tests were performed; posing a diagnostic impression of Polymyositis. The results showed a CPK ( 1435 IU/L) and CK-MB (40 IU/L) elevation, electromyography of the anterior tibial, left vastus medialis, right deltoid, right quadriceps, right long supinator and left gastronecmius reported myopathic affection with proximal musculature predominance. After the analysis of these results, specialists concluded the diagnosis of Polymyositis. Oral Prednisone is indicated for 15 days. A Rheumatology service consultation is also requested. The patient did not follow treatment nor attended to the Rheumatologist evaluation.

Polymyositis is an idiopathic inflammatory disease whose prevalence is estimated in one case per 100,000 inhabitants per year in the general population and an incidence of 5 to 10 cases per million in adults. The highest incidence occurs around the fifth decade of life and the woman / man ratio is 2: 1 (3,7). Being a disease of unusual appearance it is often considered by many specialists as a diagnosis of exclusion (1).

The factors that trigger polymyositis are still unknown. The theory of a viral cause such as Coxsackie virus, influenza virus and HIV infection has been proposed, the latter being the most accepted because of the development of inflammatory myopathies in patients infected with a retrovirus. However, several studies have yielded conflicting results. Likewise, the effect of genetic factors and environmental agents has been hypothesized (1, 4). Our patient wasn’t aware of the presence of polymyositis in his family and also denied the history of a viral infection. The ELISA test for HIV reported a negative result.

The etiopathogenesis of this disease is believed to have an autoimmune basis. The presence of a direct cytotoxicity phenomenon restricted to the expression of class 1 antigens of the major histocompatibility complex has been evidenced. Polymyositis as an isolated entity is rare; more commonly it appears along with some other inflammatory disorder, being denominated “overlap syndrome”. These include: mixed connective tissue disease (MCTD), scleroderma myositis overlap syndrome, and the antisynthetase syndrome. It is common to see physical findings such as sclerodactyly and Raynaud’s phenomenon (1,2,4). Due to institutional and economical limitations, it was not possible to perform the necessary laboratories for the detection of antibodies related to these entities.

The diagnosis of inflammatory myositis is based on the presence of at least 3 clinical and laboratory findings, including: the presence of progressive weakness in the upper and lower extremities, elevation of muscle enzymes such as creatine kinase and transaminases, Electromyography and abnormal muscle biopsy. The presence of suggestive results in the aforementioned studies and the absence of dermatological findings such as Gottron’s papules and heliotrope rash excluded the possibility of a diagnosis of dermatomyositis (4,5). In our case, it would be necessary to do a differential diagnosis with Chagas disease, which can present peripheral muscle alterations, in addition to the characteristic heart affection. Due to its similar presentation, Chagas can be confused with Polymyositis (6). A test of Machado Guerreiro was indicated, which yielded negative results.

Among the various complications related to the diagnosis of polymyositis, the most common is the development of interstitial lung disease; which has been evidenced in almost 75% of the cases (7,8,9). Cardiovascular complications have an approximated prevalence of 9 to 72% of cases (10) It has been hypothesized suggested that the development of cardiac complications are the sum of traditional cardiovascular risk factors plus the characteristic systemic inflammation in Polymyositis , which may explain the long period of time before the onset of cardiac symptoms in our patient. Cardiac symptomatology is often related to a bad prognosis in patients with Polymyositis The progress to systolic heart failure, has been documented in case reports, however, there are no controlled studies exposing this complication (11).). The development of cardiac insufficiency by cardiomyopathy tends to be observed in patients with important peripheral musculature affection (12,13). Electrocardiographic manifestations include branch block, A-V block, prolonged PR interval, left ventricular abnormalities, ventricular extrasystoles, high-grade cardiac block, Q-wave abnormalities, and non-specific changes in the ST segment (10).

Due to economical causes, in Venezuela we do not have the steroids sparing immunotherapy medications for the treatment of inflammatory myopathies.

With the presentation of this case report, we would like to highlight the relevance of a proper patient education and medical follow up, which are the keys in the prevention of long term complications. Even thought, in the Venezuelan public health system, we don’t always count with the necessary diagnostic and therapeutic tools, we as physicians try to prioritize the use of a good clinical eye and a complete medical history to obtain the correct diagnosis give the best treatment option. 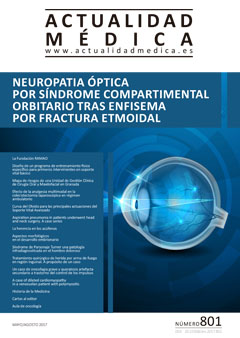