Objectives: The objective of the present study was to determine if chondrocytes isolated from human cartilage of five elderly patients (middle age 63) with osteoarthritis (stage 3) maintain their proliferation and chondrogenic potential. Isolation and cultivation of chondrocytes was performed according to good laboratory practice (GLP) standards.
Methods: Chondrocytes were isolated from cartilage biopsy by enzymatic digestion. Cultivation of cells was performed in a controlled environment (cleanroom). Phenotype characterization of chondrocytes was achieved by flow cytometry analysis.
Results: Three weeks after cultivation polygonal structures typical for chondrocytes were observed, but spindle/fibroblast like morphology was also detected in culture. Flow cytometric analysis showed that chondrocytes were positive for CD44 (98,35% ± 0,50), CD90 (97,15% ± 0,13) after first passage (P1) and the cells were negative for hematopoietic marker CD45 (0,21% ± 0,11).
Conclusions: Human articular chondrocytes obtained from five elderly patients with osteoarthritis maintained a chondrocyte phenotype and could be potentially used for autologous implantation. We have standardized the conditions for cultivation according to GLP standards to minimize the risk of in vitro cell contamination.

Cartilage tissue is composed of chondrocytes embedded within a dense extracellular matrix (ECM). It has poor autonomous regeneration capacity, mainly due to its avascular nature. Another factor contributing to poor regenerative capacity of articular cartilage (AC) is the restricted number of ECM producing cells. The percentage of highly specialized chondrocytes in cartilage tissue is only 1–3% (1). Chondrocytes are unable to migrate to a site of injury; they are able to synthesize fibrous repair tissue, but not sufficiently to fill even small defects (<3 mm in diameter) with a cartilage-like matrix, the defects are not repaired and remains permanently (2). Cartilage was used as one of the first models for research of in vitro engineered tissues and has shown the earliest application for the cell-based therapy mainly due to its cellular homogeneity and avascularity (3).

In monolayer culture, these cells respond by undergoing rapid proliferation. Histologically, these chondrocytes reversibly dedifferentiate, assuming a fibroblastic appearance and express type I collagen as opposed to type II collagen normally seen in articular cartilage. Once removed from the monolayer culture and placed in suspension or returned to the articular cartilage environment, the cells undergo a re-differentiation process into normal appearing chondrocytes and again produce type II collagen and proteoglycan aggregates (4).

In 1994 Brittberg et al described the use of ACI in treating full-thickness AC defects of the human knee (5). It was achieved in a two-stage procedure. Stage 1 involved arthroscopic biopsy of healthy AC and cultivation of the chondrocytes to produce between 5 and 10 million cells over a period of 4–6 weeks. Stage 2 involved debridement of the osteochondral lessions and coverage by a periosteal flap followed by open implantation of these cells into the AC defect.

Isolation and cultivation of chondrocytes is a widely spread technique. It is required in ACI as a treatment for ostheochondritis dissecans (6), ostheoarthritis (7) and articular cartilage injuries produced by trauma (8). In general, it can be used in any articular cartilage injury, where other surgical procedures are not sufficient (4). In vitro chondrocyte manipulation is a crucial phase of autologous chondrocyte implantation. To minimize the risk of in vitro cell contamination, the manipulation must be performed in a controlled environment such as a cleanroom according to good laboratory practice (GLP). The GLP standards provide guidance on implementing GLP requirements critical for laboratory operations (9, 10).

Work in cleanroom according to GLP standards

Isolation and cultivation of chondrocytes was performed in the cleanroom in Associated Tissue Bank of Faculty of Medicine of P. J. Šafárik University and L. Pasteur University Hospital in Košice, Slovakia. A cleanroom is a controlled environment in which the concentration of airborne particles is controlled to specified limits (Tab.1). Contaminants generated by people, process, facilities and equipment were continually removed from the air. Air flow rates, direction, pressurization, temperature, humidity and specialized filtration were all tightly controlled. Persons and materials entered and exited the cleanroom through airlocks (material pass box), gowning rooms and they weared special clothing designed to trap contaminants that are naturally generated by skin and the body. Cells were handled inside biological safety cabinets and cultivated in the gas incubators (Fig. 1). 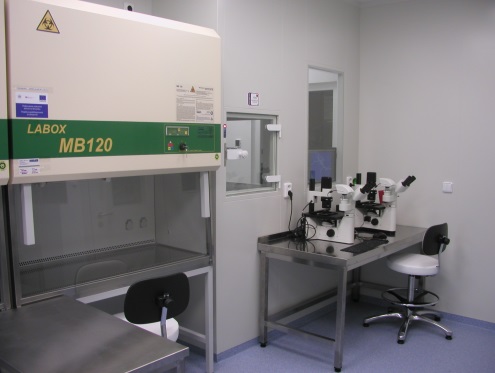 Fig. 1. Cleanroom facilities for cell cultivation according to GLP standards

Isolation and cultivation of chondrocytes

Cells isolated from human cartilage after enzymatic digestion were seeded at 75 cm2 tissue culture flask (T75) at density 35,000 cells⁄ cm2. The morphology of chondrocytes was observed under an inverted phase contrast light microscope (Leica DM IL). Non-adherent or few adherent small round cells were also present in the primary culture after 4 days of cultivation; these cells were removed with first medium change. Heterogeneous population of cells with different morphology was observed after 7 days of cultivation (Fig. 2a). After 21 days of cultivation chondrocytes had more polygonal structure, even though few of cells had spindle/fibroblast like morphology (Fig. 2b). Chondrocytes reached confluence within 3 to 4 weeks. Average number of chondrocytes obtained after trypsinization (P1) was 2,23 x 106 ± 0,5 per mL (Tab. 1). 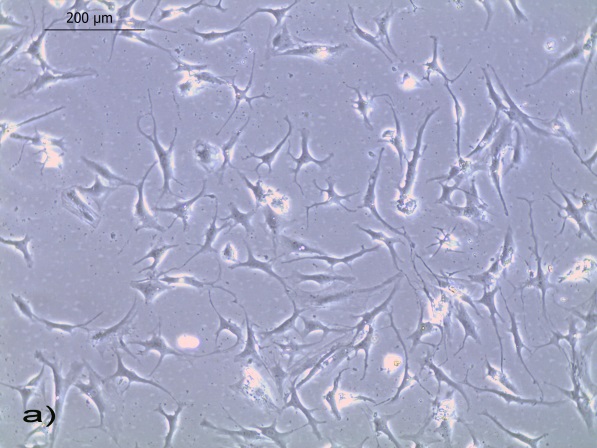 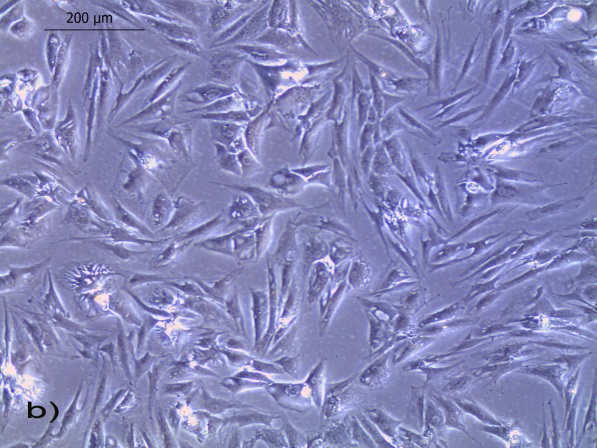 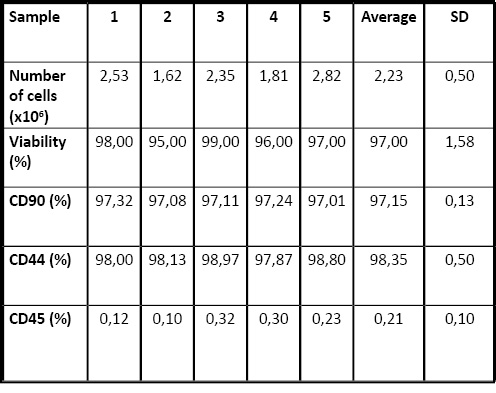 Table 1. Characterization of chondrocytes isolated from human cartilage of patients with osteoarthritis 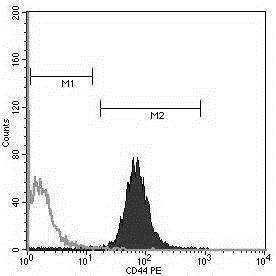 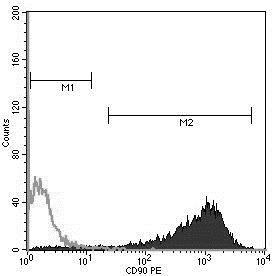 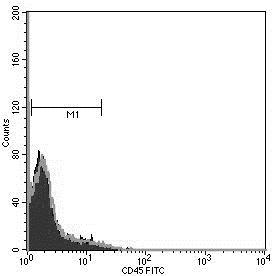 The objective of chondrocyte manipulation suitable for autologous implantation is to obtain viable and phenotypically stable cells able to enhance repair processes in the damaged area of human cartilage. Despite the importance of the extracellular matrix, the cells are responsible for the balanced turnover of the extracellular matrix, which is necessary for maintenance of the integrity of the extracellular cartilage. In vitro expansion of chondrocytes is possible via monolayer culture, whereby the cells alter their morphology and metabolism in a process known as dedifferentiation (11). The importance of monolayer expansion of cells from small biopsies is their clinical application in repair strategies such as autologous chondrocyte transplantation (5).

The aim of the present study was to determine if chondrocytes isolated from human cartilage of five elderly patients with osteoarthritis stage 3 maintain their proliferation and chondrogenic potential. It is known that upon digestion of the ECM from a cartilage biopsy and subsequent adhesion to the culturing surface, chondrocytes re-enter the cell cycle and proliferate. Three weeks after cultivation polygonal structures typical for chondrocytes were observed, but spindle/fibroblast like morphology was also detected in culture. Samples derived from aged patients, even in regions of ”normal” appearing cartilage, are metabolically not truly normal and that chondrocyte phenotype is not stable in vitro, in particular in monolayer culture (12). Most data also suggest that the major phenotypic alterations are initially observed in the superficial zone of early-stage osteoarthritic cartilage, where chondrocytes express de novo abnormal, non-chondrocytic genes; in particular, they express the enzymes required for degrading the matrix that surrounds the cells as well as many of the cytokines and growth factors relevant for turning on the catabolic processes within cartilage (13).

Immunophenotype characterization of chondrocytes was performed by flow cytometry, which offers the possibility to assess and quantify a large number of epitopes on single cells within a short period of time. Imunophenotypic analysis of cells isolated from solid tissues through enzymatic digestions might be compromised due to the reduction or even total loss of surface molecules sensitive to enzymatic treatment. Collagenase type II used in our study did not impair the detection of the CD90, CD44 and CD45 markers. We have confirmed expression of the hyaluronan receptor CD44 and CD 90 (Thy-1) on chondrocytes (1P) as was previously reported (14, 15, 16). The hyaluronan receptor CD44 belongs to the polymorphic family of CD44 glycoproteins, which have been implicated in a variety of cellular functions including adhesion to hyaluronan and collagen, and which is present in normal chondrocytes (15). It was previously reported that CD90 is also expressed in a minority of chondrocytes in normal articular cartilage (16). Up-regulation of markers on chondrocytes regarded as distinctive for mesenchymal stem cells (CD90 among others) during monolayer culture suggested that dedifferentiation leads to reversion to a primitive phenotype (17). Hematopoietic marker CD45 known as the leukocyte common antigen was not expressed on chondrocytes. CD 45 should not be present in normal chondrocytes but can appear in dedifferenciated ones (15).

It is important to enhance that cells used in this study were not applied in clinical practice and basic characterization of chondrocytes was the only aim. Nevertheless, weakness of this study is that we did not include a control of healthy articular cartilage and from younger patients with osteoarthritis due to the limitation of donors. In spite of, some investigators reported irreversible changes in phenotype between chondrocytes isolated from OA cartilage versus those of young healthy joints (18, 19, 20). Other reports indicate comparable proliferation or differentiation potential of OA chondrocytes (21, 22).

Basics methods of in vitro isolation and cultivation of chondrocytes from OA cartilage were realized in this work. The present study contains also some limitations. More precise characterization of surface and intracellular markers of chondrocytes and comparison with a control group of young healthy patients should be done. In conclusion, we can assume that human articular chondrocytes obtained from elderly patients with osteoarthritis (stage 3) maintained a chondrocyte phenotype and could be potentially used for autologous implantation. We have standardized the conditions for cultivation to minimize the risk of in vitro cell contamination according to GLP standards since chondrocyte manipulation for autologous implantation requires standardised protocols ensuring that the cell product is therapeutically effective and safe.

This work was done during Research exchange project organized by the International Federation of Medical Students’ Associations (IFMSA) and supervised by Denisa Harvanová and Tímea Špaková, both from Associated Tissue Bank of Faculty of Medicine of P. J. Šafárik University and L. Pasteur University Hospital, 041 66 Košice, Slovakia. This study has been supported by Slovak Research and Development Agency (APVV 0684-12) and VEGA grant No.1/0772/13 and Centre of Excellence for Neuroregenerative Research (project ITMS No. 26220120063). 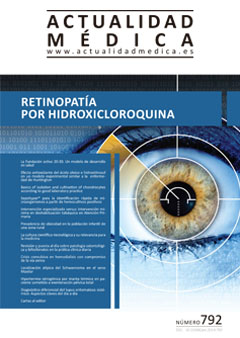