Colon morphology has  been  extensively  described  in classical treatises of human anatomy (1,2) and has been related to both visceral and bony neighboring structures. (3,4) There is considerable anatomical variability of the colon, which can mostly be explained by  embryological  development. The  rotation   of the intestinal loops influences the location of the different segments. (5) The fusion of the peritoneal layers that occurs during the formation of the mesos and coalescence fascia can influence the length of certain sections of the colon and the  positioning of  its angles. (6)

The anatomical study of the colon has employed analytical methods based on radiological images and the resulting three-dimensional reconstructions, including computerized tomography (CT), nuclear magnetic resonance (MRI) or virtual colonoscopy (CT-colonoscopy). (7, 8, 9, 10) With these techniques, it is possible to analyze how age, sex, body mass index and pelvic diameter can influence the morphology, the disposition of fixed points or the intraluminal volume of the colon, among other parameters, (11) and the anatomy of this organ can be studied by moving the patient from a supine decubitus position to a prone or lateral decubitus position,  an adjustment that is highly applicable in clinical practice. (12, 13, 14)

During laparoscopic surgery of the colon, different decubitus positions have been proposed to facilitate the correct mobilization of the intra-abdominal viscera and  thus achieve  good  colon exposure. (15) For example, to expose  the  sigmoid  colon, the surgical table is placed in the Trendelenburg position, and to examine the splenic  flexure  and the descending colon, a certain degree of right lateral decubitus positioning is used. (16–17) Therefore, for a successful surgery, it is considered necessary to vary the position of the patient so that the disposition of the colon is also modified.

No reference has been found in the literature that specifically describes the changes in colon placement that result from changes in posture.

Advantages and limitations of the technique.

The main advantage of this technique is that it is possible an evaluation of morphological changes that appear in an organ, in different pathological conditions, or as the effect of an intervention strategy. Also, this technique provides an important means of quantifying aspects of shape variation and enable visualization of these shape differences in a framework that is independent of differences in size between objects or specific regions.

The main problem with small studies is interpretation of results, in particular confidence intervals and p-values. Another major limitation is that they can produce false-positive results, or they over-estimate the magnitude of an association. In this case, a larger confirmatory study is needed.

In this study, we propose as a hypothesis that certain points of the colon change location depending on the decubitus position that is used and that these changes can be measured and analyzed using radiological methods with three-dimensional reconstruction.

The study was performed at the Jesus Uson Minimally Invasive Surgery Centre with three cadavers, two females (cadavers 1 and 3) and one male (cadaver 2), embalmed using the Thiel technique. All procedures performed in studies involving human participants were in accordance with the ethical standards of the institutional and/ or national research committee and with the 1964 Helsinki Declaration and its later amendments or comparable ethical standards. The need for written and informed consent for use of the patients’ cadaver for research purposes was not required because of the retrospective study design and the requirement was waived by Clinical Research Ethics Committee of Aragón (CEICA). The use of the images and the retrospective collection of data were approved by the Clinical Research Ethics Committee of Aragón (CE PI17/O168); data confidentiality and permission of data review were provided in the hospital admission consent.

A working protocol  was  established  and repeated for the three  cadavers.  The  cadavers  were  placed  in the scanner  on  wooden  wedges  at  a  15º  angle  to achieve the different postural changes. The pneumoperitoneum was created with a periumbilical Veress needle. Four 12-mm disposable trocars were placed in the epigastric periumbilical and both iliac fossa locations for the introduction of a 0°  Storz scope and disposable forceps in the  series required for the manipulation of the colon.

Following the described protocol, DICOM images were obtained using 3-mm CT scan sections. These images were processed with OsiriX software. The colon surface was manually individualized in all sections, and its image density was modified  to  obtain three-dimensional reconstructions. Chromatic changes in the three-dimensional images were made using Adobe Photoshop Elements 11.

The cadavers were always studied in the frontal position. These measurements were performed using the computer program ImageJ and were calculated in pixels, which were later transformed to centimeters, and in sexagesimal degrees. The reference measurement was the SPINE-SPINE distance. To minimize the possible degree of distortion that could result from modifying the cadavers’  position relative to supine decubitus, this measure was used to apply a correction factor in each series. Thus, the differences observed in this measure after the cadavers were successively repositioned were less than 2%. A correlation analysis was performed to assess the dependence of some variables on others.

A total of 390 measurements were performed (Figure 1). Series 01 of the three cadavers was used as a reference and 159 measurements were modified more than 5% compared to this baseline. To systematize these results, we divided them into four sections depending on the angle and its components (Figure 2).

Figure 1. Three-dimensional reconstruction and chromatic change of the surface of the colon without pneumoperitoneum or any decubitus posture (Series 01). a: Cadaver 1. b: Cadaver 2. c: Cadaver 3.

Table 1. Variables related to the distances between PUBIS-SMA-IMA.

Computer-aided anatomical analysis with the DICOM protocol is the most widely used medical imaging standard for the study and transfer of images. (18,19) This technology allowed us to  examine  the  positions of different points of the  abdominal  viscera  induced by different decubitus positions. (12-14) Our  results are both descriptive and quantifiable. To perform interventions in laparoscopic surgery, the patient is positioned in decubitus to make the  viscera  targeted for the surgery more accessible. (15) However, the use  of these decubitus positions is intuitive and is based on the positioning of organs. (13,15) Our results were not homogeneous, so the mobility of the different points studied could be related to more than one factor, such as fixations to the peritoneum and the proximity of other viscera.

Limitations of the study could include the small number of cadavers used and the method of fixation. Regarding the  first,  the  performance  of  ten  series in each of the three cadavers significantly increased the sample size of our study, so we consider the total number of measurements sufficient to initially assess the movements of the colon. Regarding the second point, the Thiel technique is the fixation technique used for training models for laparoscopic surgery. (20,21) Since it does not make the cadaver excessively stiff, it is considered ideal for the study of the mobility of the abdominal viscera. (20)

Our descriptive results are difficult to systematize when compared with the  individual  characteristics  of the colon. Cadaver 1 had  the  longest  colon  and had the largest number of modified  variables. Cadaver 2 had a very short colon and an intermediate number of modified variables. Finally, the colon of cadaver 3 had an intermediate length and the fewest modified variables. These results do not support the hypothesized relationship between size of the colon and the changes in the variables.

According to the correlation test, the angle between the inferior mesenteric artery and the colic flexures increases as the distance from the mesenteric artery exceeds the hepatic flexure and vice versa. The hepatic flexure is in direct contact with the renal fascia since the peritoneal folds that attach  it  to  the  posterior wall are very short; this configuration confers limited mobility. In contrast, the  splenic flexure is  attached  to the wall by the phrenicocolic ligament, which is a longer peritoneal fold and thus allows more mobility. (1-3) Therefore, when the inferior mesenteric artery is mobilized, the angle formed between it  and  the colic flexures is more closely related to the distance between the artery and the hepatic  flexure,  which  has a fixed end, than to the distance from the splenic flexure, whose two extremes are laxer.

The variables related to the angle between the superior mesenteric artery and the colic flexures changed in different directions, and a high correlation index was not obtained. This may be because, as noted  above, the superior mesenteric artery point depends on the pancreas, the pancreaticoduodenal artery outlet, and the mesenteric root, making it difficult  to  predict their movements in relation to the hepatic and splenic flexures. (3,4)

Changes in the position of certain segments of the colon have been identified during virtual colonoscopy studies when the patient changes from  supine to prone position. (12-14)  These  changes  may be  due to the need for insufflation of the colon to carry out the study. In fact, in endoscopic studies, the lateral decubitus position can be changed to the supine decubitus position to achieve a better intraluminal approach to the colic frame. (12)

Laparoscopy is currently the technique of choice for most surgical procedures on the colon. Many studies have been published comparing laparoscopic surgery with open surgery and showing the benefits of laparoscopic surgery. (22,23) The series established in the working protocol reproduced the different postural changes performed during  surgery.  The  aim of lateral decubitus positioning  is  to  displace the  intestinal loops  towards  the  corresponding side, obtaining a good exposure of the colon, and to attempt greater medial displacement of the hepatic flexure or the splenic flexure (according to the side) when performing correct traction. More mobile points, such as the ileocecal junction or even the descending colon-sigmoid junction, may have greater displacement.(16,17)   Regarding   our   proposal, our quantitative results  are imprecise.  However, the correlation analysis allowed us to relate the displacements of the studied points to one  another.  In this way, we have associated these displacements with the mobility of the points according to their insertion in the peritoneum. A  short  insertion allows little mobility (hepatic flexure), in contrast with a long insertion  (splenic  flexure)  or a  less fixed insertion (inferior mesenteric artery).  When the point studied was related to additional factors, such as the proximity of another organ or vessel (superior mesenteric artery), the displacement was more difficult to determine. Thus, when  a  distance  is defined by a fixed point and a moving point, it is easier to determine its angle than if the segment is delimited by two moving points.

Colon undergoes changes in the location of certain segments in the application of factors such  as position changes and pneumoperitoneum pressure. These changes, which can be measured by three- dimensional reconstruction images, could be related to their fixations to the peritoneum, to the proximity of the neighboring viscera and to their  location in  the abdomen. (24)

The authors wish to sincerely thank those who donated their bodies to science so that anatomical research could be performed. Results from such research can potentially improve patient care and increase mankind’s overall knowledge. Therefore, these donors and their families deserve our highest gratitude. 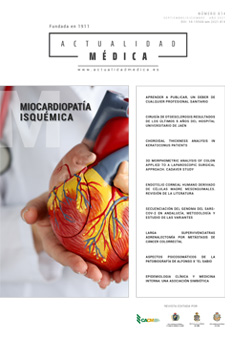